Back to all news & events

S7, THE SPORT YACHT WITH A GREEN HEART 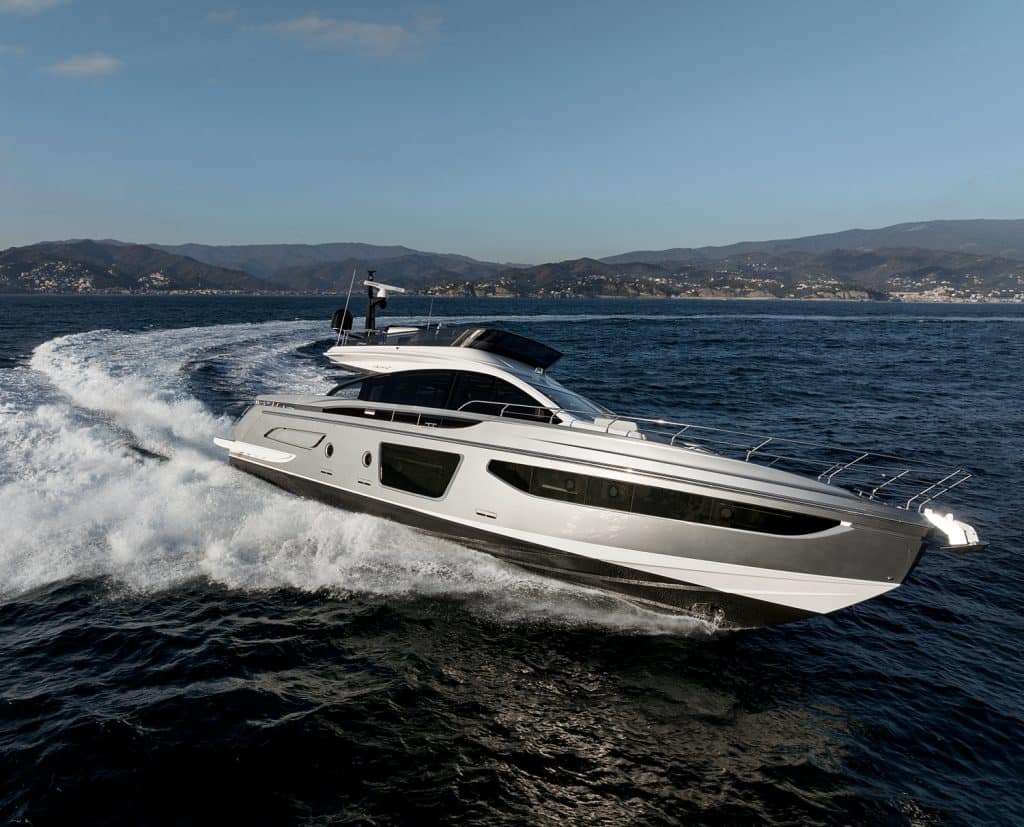 The Azimut S7 is the most advanced Sport Yacht in her category. Superlight and technologically advanced, the S7 delivers high performance with reduced fuel consumption and cuts emissions by up to 30 percent.

This is the dream boat for contemporary owners who are dynamic and sporty, who love cruising in grand style and in absolute safety, and who also like to keep a close eye on sustainability. Azimut presents the New S7, which embodies the brand’s revolutionary eco-sport philosophy. Combining a triple Volvo IPS engine configuration with a high-efficiency hull and the extensive use of carbon fiber, the New S7 delivers maximum performance while qualifying for Azimut’s family of Low Emission Yachts, ensuring a reduction in both fuel consumption and emissions of between 20 and 30% compared to shaft line boats of the same weight and size with a traditional hard-chine hull. The innovative triple propulsion system is also more compact, freeing up more space on board.

The S7’s sporty character is highlighted, thanks to the exterior design by Alberto Mancini, who penned the her sleek, dynamic profile, which is immediately eye-catching. The defining feature is the arched line created by the extensive glazing that runs seamless along the superstructure. This magnificent graphical sweep and the cut-out bulwarks ensure that the interiors are filled with as much light as possible.

The interiors have been designed to maximize volume, to host spaces equal to those of larger vessels. The layout unfolds from the salon on the Main Deck, which seems even larger and brighter thanks to the decision to place the galley in the bow section, so as to create total continuity between the exteriors and interiors. Four cabins – including a master suite unique in size on boats of this segment – accommodate guests, who can choose, while enjoying the external decks, between multiple cozy and versatile areas, including a Sport Fly so well integrated into the streamlined design of the exteriors that it becomes a large terrace with sunbathing and a second outdoor dining on the cockpit. The garage on this model is particularly generous and can contain two water toys: a custom version of the Pirelli J33 tender made for Azimut, and a jet ski.

The interiors are refined and comfortable, always maintaining direct visual contact with nature. The salon unites with the cockpit, creating a single space, in which the panorama becomes part of the interior design by Yachtique. Now making its debut design project on an Azimut yacht, Yachtique is an Italian creative boutique, specializing in interior design and decor and a key player in the creative direction of Azimut|Benetti Group’s Innovation Design Hub. For a number of years now, Yachtique’s team of architects has been working alongside leading design firms to customize large yachts and create sophisticated interior designs for major refit projects. This experience allows them to navigate effortlessly and creatively around the most interesting current trends, in both the residential and marine spheres. In designing the interiors of the S7, Yachtique drew on cues from various sources, with the aim of creating a chic residential style that never forgets the intended use of the yacht.

The star of the show is light, which floods into the salon through the large windows of the superstructure and is perfectly integrated into the onboard lighting design. Opaline ceiling lights run from bow to stern, working with the ribbed-effect detailing to help bring out the yacht’s dynamism.

The style choices are intended to achieve a sense of discreet refinement in an interior design project grounded in practicality, where the elegance is expressed by warm, understated and perfectly balanced color shades, ranging from cream to dark brown, as well as by the use of fine materials and attention the smallest detail.

The main wood, pale Dove tay, contributes to the lightness and brightness of the architectural enclosure and creates harmonious contrasts with the flamed Canaletto walnut, chosen to finish the furnishings. Special attention was focused on the details, such as the natural leather compartment in the TV unit in the salon, which seems to hang in mid-air, thanks to the LED lighting in the base, the large fabric sofa’s detachable natural leather backrests, and the twin coffee tables that serve the sofa but can also be raised and converted into a large dining table with a top that moves horizontally to offer the best possible ergonomics.

The expansive, light-filled master suite positioned aft on the lower deck is unique for a 22-meter yacht. Echoing the style of the salon, it has two large windows on either side that place it in direct contact with the water, creating an even more scenic sensation. The layout has made it possible to create a display case along the forward bulkhead, representing an eye-catching storage with internal lighting. The master bathroom is stylishly appointed. The shower features smoked glass to add a charmingly light touch to the architectural design, folding like a screen to form the opening angle of the dressing room door.

Completing the sleeping area are three guest cabins: a VIP cabin forward with a double bed and ensuite bathroom, and two doubles, one with twin beds and the other with two beds in an L-shape.

The new S7 is equipped with three Volvo Penta D13 IPS 1050 engines rated 800HP (588kW). With Tier III certification, they are compact in size but highly efficient, delivering a cruising speed of 27 knots and a top speed of 35 knots.

The Azimut S7 is designed and built according to the highest standards in the sector and is covered by the HTS – High Technical Standard declaration issued by the shipyard. Complying with the requirements for both CE Category A classification and NMMA certification, the S7 meets the two most important safety codes for boats under 24 meters.

Explore more
Back to all news & events 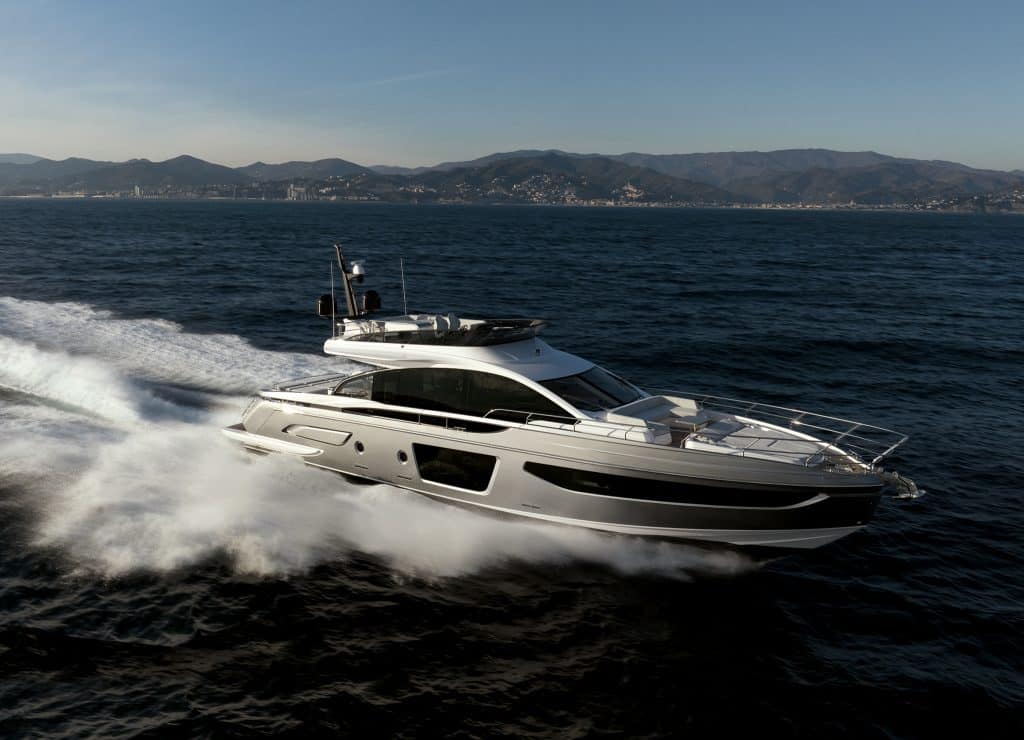 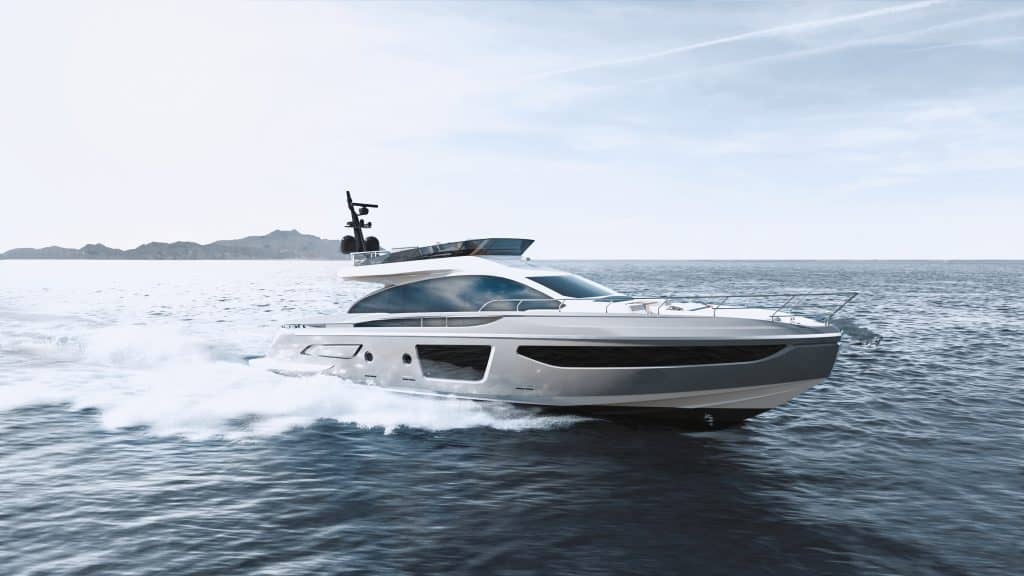 CONTINUE TO GO BEYOND, WITH US

Our newsletter will provide you with the latest news, on boat launches, previews and shows.
I’m interested
An error occurred, try again later
THANK YOU FOR YOUR INTEREST.

An error occurred, try again later
It’s good to have you on board.

You will soon receive your first newsletter with the latest Azimut news.

An error occurred, try again later
THANK YOU FOR YOUR INTEREST.

We have successfully received your request. One of our select dealers will contact you shortly.

Thank you for your interest